Introducing Chant into the Domestic Church

[The following is an NLM guest article submitted to us by one of our readers after reading our post here, The Family Celebration of the Divine Office, published Dec. 1, 2011.]

Introducing Chant into the Domestic Church

The music proper to the Roman Rite is Gregorian Chant. This point has been repeated by numerous Popes, by the Second Vatican Council, and by liturgical scholars spanning the centuries. There are many reasons for this, of course, but the primary one is that Gregorian Chant grew along side the liturgy, so much so that the two are intrinsically connected. Where there is liturgy, there is chant, and where chant is absent, the liturgy suffers greatly.

The term domestic church appears in the documents of Vatican II. There are some who say that Pope Paul VI coined the term, yet there are early church documents that refer to the family as the domestic church. It appears that this concept has been a part of Catholic tradition since the patristic era. The essence of the domestic church is that the family, and not the geographic parish, is the first “church” we encounter. This is true as a child, but it remains true even into adulthood. The Catechism of the Catholic Church teaches that the home is the first school of Christian life, the place where people learn love, forgiveness, and a life of prayer.

Piecing together these two ideas, it seems that (1) if the music proper to the Catholic Church is chant, and (2) if the domestic church is the first place that we encounter worship, then it follows that Gregorian Chant should find a place within the life of the family. I suggest that there are three ways in which sacred chant can become rooted in the family and thereby serve as a means of formation for both children and parents.

First, while the family has a primary obligation to live out a life in prayer, all prayer finds its source and summit in the sacred liturgy. It is in the sacred liturgy in that the chant of the Church finds its purpose and fulfillment. Parents who attend a parish that employs chant regularly are very fortunate indeed, for these folks will be able to find both a starting point and support for any chant introduction that they bring into the home. It is absolutely essential that we experience chant in the context of the liturgy. For those who are not fortunate enough to have a regular schola or even occasional chant, perhaps parents can find other opportunities in the area.

The second way to bring the music of the Church into the domestic church is through high quality recordings. We live in the age of the internet where albums once obscure are now available at the click of a mouse. Obtaining the chants proper to the Mass is easier than it has ever been. I recommend getting a copy of various settings of the Mass Ordinary (pieces like the Agnus Dei and the Kyrie that are a part of every Mass). Because children are already familiar with their place in the Mass, parents can introduce not only their music but also their meanings quite easily. One need not be a Latin scholar to tell a child, “This is the Lamb of God,” and to remind the child of the vernacular translation. I also recommend getting some pieces that are not familiar and whose translations may not be accessible to everyone. The reason for this is twofold. First, it is not necessary to understand the Latin words in order to appreciate the music. Sometimes it is better just to sit and be absorbed into the glory of the graceful rising and falling of notes. Second, pieces from the Mass Propers (those parts that change form Mass to Mass, such as the Introductory Chant, or Introit) are often more ornate and quite beautiful. In particular, the Communion chants that are part of the Church’s liturgy are often little masterpieces in and of themselves. Finally, I recommend getting copies of the “standards,” chants that are not necessarily a part of the Mass but help form the rich patrimony of the church’s musical tradition. These chants would include the classic Marian hymns (Ave Maria, Salve Regina, etc.) as well as other hymns such as the Te lucis and Tantum ergo.

When purchasing quality recordings, I would begin with the schola out of Oregon that calls themselves Cantores in Ecclesia and is directed by Dean Applegate. They have three albums available. The first is O Lux Beatissima, which is a collection of the Mass Ordinary and many other common Catholic chants. The second is Cantemus Domino, which contains examples of Mass Propers. The third is Inclina Domine which has more Mass parts from both the Ordinary and the Propers. (If you are looking for where to begin, my own personal opinion is with O Lux Beatissima.)

However, we live in an age where many people are posting quality recordings for free online. A quick Google search can usually lead to a plethora of high quality pieces. 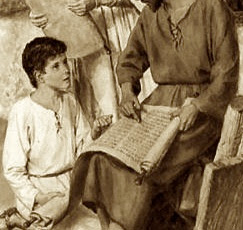 The third way in which to bring the chant of the Church into the family is by actually teaching young children these “Catholic classics.” A friend of mine who grew up in Italy often reminisces about the chant that was sung in his humble home. The children all grew up knowing an entire repertoire of Gregorian selections. He also laments the absence of such an environment in our current culture. For my own part, this strikes me as but one of the ways in which we have seen a loss of Catholic identity. This music is our music; it is a part of our heritage. An Italian family would never abandon traditional pasta dishes from their dinner repertoire. Similarly, a Catholic should never abandon his own musical heritage. Despite the fact that most liturgies have, contrary to the recommendation of Vatican II, left Gregorian Chant in the dust of the 1960’s, it remains the traditional music of the Roman rite.

We have taken to reciting Compline (or Night Prayer) with the children before bedtime. Compline is well suited for children because it repeats every week. Little ones will memorize virtually the entire week in under year merely by listening. (It takes “big people” much longer, of course!) This all has bearing on the topic of Gregorian Chant because it is traditional to chant the psalms that form the backbone of each hour. This need not be done in Latin, of course, for there are easy plainchant tones that can be learned by even the musically untrained. More to the point, it is common to end the hour with a Marian chant proper to each liturgical season. For instance, in the season of Advent the chant is the Alma Redemptoris Mater. The others include Ave Regina Caelorum (Lent), Regina Caeli (Easter), and the Salve Regina (Ordinary Time). Over the years, my children have been picking up each of these (and the Ave Maria as well). This past Advent we added the last of the collection (Alma Redemptoris Mater), and nothing touched my heart more than when three of my children greeted me at the door about a week later excited to tell me that they had “learned it.” There they stood in front of the fireplace mantel, and they chanted in unison the most angelic melody I have ever heard.

Obtaining quality recordings can go a long way in helping a family to learn the chants that they will integrate into their prayer life. Of course, obtaining the musical scores is helpful as well. The internet is filled with these Gregorian scores. However, for Compline, I recommend Fr. Samuel Weber’s book by the same name published by Ignatius Press. It contains both Latin and English text and music printed in an exquisite setting for the full week of Night Prayer.

Gregorian Chant is the music that is proper to the Church. It seems only right that it should find a place in the home as well; that is but one way in which the domestic church can orient itself to the Universal Church.