Can We Really Repent And Amend Our Lives?

I watched a movie recently. It wasn’t very good, so I don’t remember its title. But I do remember its main message: “You are who you are. You can’t be any different, so there’s no use in trying to change. Therefore, other people should understand that and accept you as you are.”

US Catholic Nuns upset at Vatican

Very recently I was involved in a ongoing discussion regarding the recent decision by the Vatican to clean up serious issues regarding disenting Catholic Nuns in the United States (full story here). The majority of the discussion revolved around the fact that some, and possibly many of these Nun’s felt hurt by the Vatican’s decision to reform them on the correct teachings of Abortion, End of Life Issues, and other issues stemming for legimate authority and morality. There was one woman in paticular who was confused and seemingly upset (not overly) that many in this dicussion was praising the Vatican’s decision.  She felt that each is entitled to their own opinion, and that she struggled with some of the Church’s teachings herself.  She believed that one could openly dissent on Church teachings and still be in communion with Christ.  There were many good responses to this which I won’t rehash, but I have included my own contribution to this discussion.

The media circus which goes hand in hand with U.S. presidential elections has been underway for some time now. It’s simply amazing how much time and money is spent on this spectacle and it seems that it begins earlier and earlier with each new election campaign.

The actual election will not be held until November, but coverage began about a year before that. Each comment made by candidates is carefully scrutinized by political “experts,” and public opinion polls are held, it seems on a daily basis, to determine which candidate is doing best.

The media charade finally subsides after the election, when the nation soon discovers that, after all the hype and hoopla, very little actually changes. 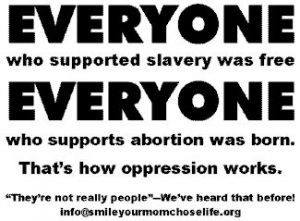 The above picture sparked a heated debate on facebook, here is the debate below, and just how far gone our society is.

On Easter morning, I rejoice because Christ is risen, but it saddens me that most people do not really believe in Him.

On Easter morning, I’m glad that Lent is over but it saddens me that most people did not use those 40 days to come closer to God.

We know that original sin came through deception, and I believe that deception is used to bring many men to damnation. Here are some common deadly deceptions: 1) There is no devil; 2) God is too good allow anyone to be damned; 3) There is no hell; 4) Hell is empty; 5) Hell isn’t so bad; 6) All religions are alike; 7) One will have an opportunity to repent after death.

The purpose of life on earth is to prepare for eternal life. Distractions are anything that take our minds off that all important purpose. Life is full of these distractions. Many of them are necessary. Some, in small doses, are basically harmless. While others are deadly.

We spend a third of our lives sleeping. Many adults spend at least 40 hours a week working. The average Canadian spends three to four hours a day watching TV. Many others spend their leisure time playing lottery tickets, reading the newspaper, chatting on the phone or shopping. While none of these things are necessarily sinful, how much time do they leave for praying, doing charitable work or going to Mass?

https://www.washingtonpost.com/opinions/embraced-by-the-catholic-church-at-the-funeral-for-my-mother/2012/03/15/gIQAV12CHS_story.html   I saw someone post this article on reddit you can read the comments about the Washington Post Article.   https://www.reddit.com/r/Catholicism/comments/r24lt/embraced_by_the_catholic_church_at_the_funeral/   Basically a ex-Catholic woman left the Catholic faith, and became a priest.  Her Mother still a Catholic died, and was invited to concelebrate with the Catholic Priest at the funeral.  What a…

The Dangers of Success

The Dangers of Success

The gossip magazines are full of stories about famous, beautiful and rich people who have been victims of their own success. Whitney Houston and Michael Jackson are perfect examples. In spite of this, the majority of people persist in believing that fame and fortune guarantee happiness.

No one wants to fail. Yet God often allows failures in our lives to draw us closer to Himself. The completely successful person often gives himself the credit. He often becomes puffed up with pride. He may acknowledge God’s supremacy, but may never humble himself before God and may never admit his need of God’s mercy.

It may not be known to most Catholics, but Yoga is incompatable with Catholicism. Yoga seeks to empty yourself, and focus yourself inwards.  Authentic Christian Mediation empties yourself and seeks to fill yourself with Christ and the things of God. That is the key difference.  When practicing yoga you are opening yourself to the danger of foreign spiritual entities because the Devil seeks to influence those who willingly or unwillingly are practicing pagan religions.  Yoga is inheretly connected with the Pagan religion of Buddhism which violates the first commandment, and despite what some may claim the religious aspect cannot be seperated from the spiritual aspect.  You can read the full story below about how the Archdiocese of Boston plans to make Yoga classes available at their chancery office.