The Pope condemns the climate change prophets of doom

Pope Benedict XVI has launched a surprise attack on climate change prophets of doom, warning them that any solutions to global warming must be based on firm evidence and not on dubious ideology.

The leader of more than a billion Roman Catholics suggested that fears over man-made emissions melting the ice caps and causing a wave of unprecedented disasters were nothing more than scare-mongering.

The German-born Pontiff said that while some concerns may be valid it was vital that the international community based its policies on science rather than the dogma of the environmentalist movement.

His remarks will be made in his annual message for World Peace Day on January 1, but they were released as delegates from all over the world convened on the Indonesian holiday island of Bali for UN climate change talks.

The 80-year-old Pope said the world needed to care for the environment but not to the point where the welfare of animals and plants was given a greater priority than that of mankind. 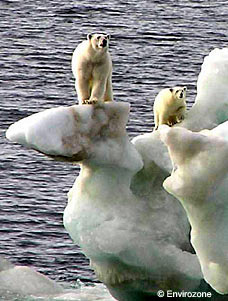 “Humanity today is rightly concerned about the ecological balance of tomorrow,” he said in the message entitled “The Human Family, A Community of Peace”.

“It is important for assessments in this regard to be carried out prudently, in dialogue with experts and people of wisdom, uninhibited by ideological pressure to draw hasty conclusions, and above all with the aim of reaching agreement on a model of sustainable development capable of ensuring the well-being of all while respecting environmental balances.

“If the protection of the environment involves costs, they should be justly distributed, taking due account of the different levels of development of various countries and the need for solidarity with future generations.

“Prudence does not mean failing to accept responsibilities and postponing decisions; it means being committed to making joint decisions after pondering responsibly the road to be taken.”

Efforts to protect the environment should seek “agreement on a model of sustainable development capable of ensuring the well-being of all while respecting environmental balances”, the Pope said.

He added that to further the cause of world peace it was sensible for nations to “choose the path of dialogue rather than the path of unilateral decisions” in how to cooperate responsibly on conserving the planet.

The Pope’s message is traditionally sent to heads of government and international organisations.

His remarks reveal that while the Pope acknowledges that problems may be associated with unbridled development and climate change, he believes the case against global warming to be over-hyped.

A broad consensus is developing among the world’s scientific community over the evils of climate change.

But there is also an intransigent body of scientific opinion which continues to insist that industrial emissions are not to blame for the phenomenon.

Such scientists point out that fluctuations in the earth’s temperature are normal and can often be caused by waves of heat generated by the sun. Other critics of environmentalism have compared the movement to a burgeoning industry in its own right.

In the spring, the Vatican hosted a conference on climate change that was welcomed by environmentalists.

But senior cardinals close to the Vatican have since expressed doubts about a movement which has been likened by critics to be just as dogmatic in its assumptions as any religion.

In October, the Australian Cardinal George Pell, the Archbishop of Sydney, caused an outcry when he noted that the atmospheric temperature of Mars had risen by 0.5 degrees celsius.

“The industrial-military complex up on Mars can’t be blamed for that,” he said in a criticism of Australian scientists who had claimed that carbon emissions would force temperatures on earth to rise by almost five degrees by 2070 unless drastic solutions were enforced.